The Talking Skull (unlocked with the Stranger Sins DLC) is located east of the village. It is a Tavern that you build and own. It is also a front to provide cover for the unearthing of an ancient machine and shows you images of the past. You can sell drinks and hold events which allow you to also sell food.

The Barman, who is inhabited by the ghost named Yorick, is located behind the bar. He sells drinks and food to the patrons of your establishment. He has an accessible inventory in which you can place food to sell during events.

The cellar is located behind the bar, in the basement of the tavern.

The higher your Tavern Quality

the more patrons will visit your tavern. The tavern can be upgraded to a maximum of

is earned though selling Beer, Booze, Mead and Wine to the villagers. This can be done by placing drinks on the racks in the cellar. The drinks are automatically pulled from the shelves and sold. The higher the quality of the items you sell, the more reputation you gain. There is a gauge on the reputation meter that tracks how much reputation your Tavern is gaining. Once the bar is full a

appears next to the bar. You can have a maximum of 3

on the meter. After that all reputation will be wasted until you hold an event.

can be used to create events.

You can place the artifacts you gain during your quests once you have used them in the machine in the cellar.

The upgraded tavern comes with a 10% "Tavern upgrade bonus" on any alcohol sold and allows you to build the rat race event, once the quest line is far enough along, and more tables to increase your

Any acceptable beverages, that are stored in either the chest or the box racks in the cellar, will gradually be sold to patrons of the tavern. A sale is made every ~1:07 (or ~7 sales per in-game day), with each sold beverage generating a respective amount of money and

0.065. Each sale consumes multiple beverages, the number of which is dependent on the tavern quality, the maximum being 12x requiring at least

The trade report details the money and

you've earned selling your drinks during the day and food during events. 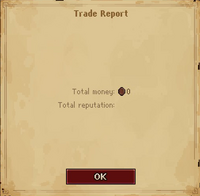 Once you unlock the events, via tavern upgrades and progress along the quest line, you can hold events at the tavern after you earn enough
Tavern reputation. Events allow you to sell food and drinks There are four events to run. Each event has special food requirements to make your patrons happy. There are achievements for each event that can be unlocked by running an event with a high amount of happiness.

Before you begin an event, all the consumables you wish to sell must be in the Barman's inventory, which you can fill by speaking to him or by preparing food items at the Professional Kitchen or the Professional Oven in the tavern's cellar.